Trail Ride at Canyon Lake with my Daughter...

This is going to be a hard story to write, and I've purposely let myself have a few days to absorb everything that happened before I tried to tell it. But here goes...

Breathe organized a trail ride at Canyon Lake to take place on a Sunday morning. I had convinced (basically mandated) that my daughter V attend with me on her horse Lola. I wanted the father-daughter bonding time, and I also wanted to "push" V into riding the horse that she had me buy her. To this point, her riding has been rare and for short rides.

The day before, V and I went on a trail ride in my neighborhood, where Lola had cantered for a short burst and sent V into a total panic. But after she recovered, she admitted it had been kind of fun. But V had never really cantered before that time, and I've been frustrated at her reluctance to even TRY to canter. Mainly because I know a rider can't expect a horse to NEVER canter, and the longer she puts it off, the bigger her freak out is going to be when the horse DOES canter. V is a very beginner rider, and doesn't always accept instruction well. She's my daughter, so I can say this, but I KNOW she has to be pushed sometimes.

Her attitude was bright on Sunday morning. We joined the riders at the trail head, and tacked up. Lola was being very good and relaxed, and V seemed relaxed as well, but with some of the nervous tension that we all have when riding with new horses. We headed out and all went well for much of the ride. Several times, Lola and V were walking SO slowly, they fell way behind, and I had to circle back and encourage her to trot. 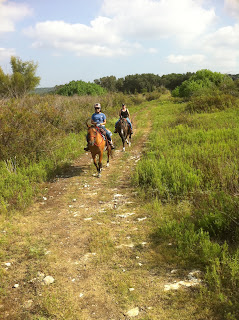 Lola and V (in front), along with Sharon bringing up the rear
Woody, my Azteca mount, was a handful, and very much wanted to be in the front of the herd, which I could NOT allow him to do because I had to keep an eye out for V and Lola. In fact, he was being a huge pain in the rear, and I was regretting riding him in the snaffle I had chosen for the ride, because I was having a hard time rating his speed.

It was a perfect trail ride, and we were well on our way home when we came upon a nice, long, clear stretch of the trail. The front of the herd loped/trotted through the area, and I stayed back with V. I then had the foolish notion that ended in disaster. Even though I almost NEVER lope when headed back to the trailer, I felt we were far enough away from the end of the trail ride that perhaps a lope wouldn't be out of the question. By this point, V had been trotting aggressively and seemed more comfortable with speed. I grabbed her lead rope with my right hand, kept her on my right, and told her we would go a little faster through this area. I had been ponying she and Lola at several points along the trail in an effort to encourage V to trot with me and keep up, and that had been working well, with me using Woody to keep Lola going.

We started off at a trot, and went into an easy lope. V was getting nervous, but was also smiling, so I thought I had made the correct decision to push her. Then it got ugly.

Woody accelerated, and Lola responded in kind. In a heartbeat, we were in a flat out out run. I hauled back on Woody's reins, but he had the snaffle out of his way and he was off to the races. V was hauling on Lola, but the two horses were in a competition, and they were both hard headed horses that wanted to win at all costs. We were nothing on their backs, and they had forgotten we even existed at that point. It was my worst nightmare; V was on a run away horse.

I realized at this point that the only way to stop Woody or Lola was a one-rein stop. But I had my right hand occupied with the lead rope, and I couldn't perform the maneuver. V had no idea how to do a one rein stop, and so she couldn't rate Lola down.

We were fast approaching the herd, and I hoped Woody and Lola would slow as we approached and allow me to regain control. But it quickly became apparent they intended to run through the herd and continue the race back to the end of the trail.

I started to circle Woody to the left, the only clear spot available, although it was marked by heavy grass and low brush. I figured that circling him to a stop was my only option. He did circle, and started to slow, but we were circling at a canter, and I knew this move was going to be tough for V to handle. I tried to make the circle as gradual as possible, hoping she would be able to ride through it. Lola only circled because I still had hold of the lead rope, but she was circling very wide, and the pressure for me to hold onto the lead rope was intense.

What happened next was told to me, as I was too busy with my task at hand to see it all. Apparently, the saddle started to slip off Lola as we went into that circle, and V started to slide off Lola with the saddle. At some point, she realized the situation was hopeless, and she lept off Lola, landing in the only clear spot of grass around. Lola continued on, and then started to kick at and destroy the saddle as it slipped underneath her body. At that point, I knew V was off, and the burn and pain in my hand told me I was losing flesh on my hand from my grip on that lead rope, and I released Lola and the lead rope. Lola finally ground to a halt, the saddle in pieces underneath her and the lead rope wrapped around her leg.

I can't begin to tell you the feeling in my stomach as I saw V on the ground. But I heard her starting to cry, and I knew that was a good sign. An even better one was when I saw her struggle to her feet. I jumped off Woody and handed the reins to another rider, and rushed to V, trying not to reveal the concern in my voice.

She was OK. Obviously she was shaken up, but she had no broken bones and no head injuries. Immediately, the other riders present, all female, told V that "these things happen", "oh, you should hear some of my stories about falling off a horse", "you didn't do anything wrong, it was the saddle", and so on.

I knew V was going to come off a horse sooner or later, and I knew it was going to be sooner, because her balance is bad and she hasn't been pushing herself to be a better rider. But I sure hadn't wanted it to be indirectly because of my actions. But I could NOT have asked for a better environment for V to be in when she did come off Lola. The riders were SO supportive, and not at ALL babying. In fact, after she had gotten most of her tears done with, they MADE her get up on another horse, a tall Tennessee Walker, and had her ride him to end of the trail. By the end, she was smiling and felt all the love and encouragement from the "girl power" that was infused into her.

I tied up the horses, and then left V to change into her bathing suit. Despite her fall, she wanted to "swim with the horses" as all the other riders were preparing to do.

I removed the broken saddle from Lola, tacked her up in my gear, and proceeded to ride the snot out of her back on the trail, and leading AWAY from the other horses. I wanted to kill both she and Woody, but for now, I was going to let her know that she needed to pay attention to signals. As suspected, she tested me a little bit, but she otherwise rode well, and after a few tries, was stopping so hard she jammed my spine. In other words, the situation was a difficult one, and she didn't have the rider to control her in that set of circumstances, and that's how I got us in the pickle that developed.

I changed into my swim trunks, and V and I "swam with our horses" leading them into Canyon Lake until the water was to their backs. V LOVED it. I couldn't get her out of the water. She enjoyed the entire experience, and delighted in cavorting with the other riders and their horses in such a unique treat of lounging in the water with the horses.

We finally got out of the water, and tied up the horses, letting them eat hay and dry slowly with the sun. The rest of the riders set up a picnic. V and I joined in, and were glad we had packed a healthy lunch. The stories went round and round the table, with many riders recounting their disasters and triumphs with various horses. V definitely felt she had experienced her own adventure. 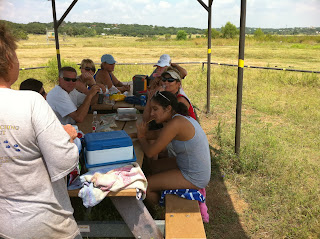 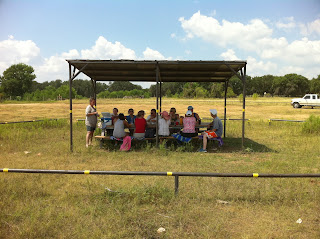 We rested at home, and then V and I headed out on another trail ride that same day, and I taught V the one rein stop. She grinned wildly when she felt how quickly Lola stopped when she just used one rein rather than both. You could tell she enjoyed knowing how to use this "emergency brake". 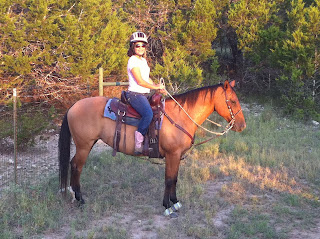 V and Lola on a trail ride AFTER the fall...she's smiling!

Since this past Sunday, V has shared her story with all her relatives and friends, and the story is getting better and more embellished with each telling. I am sorry V had to fall, but I actually feel the experience has helped her to grow by leaps and bounds, and has improved her horsemanship immensely.

As for Dad, well, you know I learned a lot, too. And I'll be scaling back on cantering on the trail, but I WILL be pushing V in the round pen; and I think she'll handle it just fine.
Posted by Trailrider at 8:29 AM

Add it to the lessons learned pile - my pile is big and getting bigger by the day! And be sure to forgive yourself while you're at it - it looks like V isn't holding it against you, and glad she's OK. That's a nice picture of her and Lola - they look great together. Sometimes things happen for a reason.

I think at some point we`ve all been their! I`m pleased V is ok! ....I can relate to this. There is nothing that concentrates the mind more than being onboard a runaway horse!

V is one tough girl - and I hope she does get more engaged in riding now that she can appreciate what a little knowledge can do.

Stepping on our cape as parents is never fun, but I think our children need to experience these things we'd rather they never went through.

I'm also glad you're going to scale back on your expectations a bit. I think she'll bloom with that approach.