It just gets better and better... 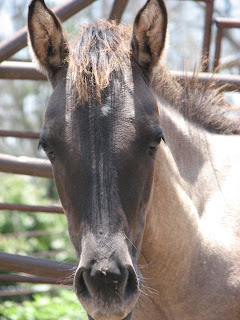 Today I received Joey's (the grullo) papers. I knew his genealogy already, but these were the official papers. It listed the previous owners, and his breeder. I googled her name, and gave her a call. And I heard stories of his life as a foal.

The breeder is Helen Cox with Chance Cutting Horses. She remembered Joey right away, and told me to kick my feet up while she told me stories about Joey. He was always a calm, cool temperament kind of horse. She told me he was one of those horses she hated to let go, because he was that good. He would follow her around while she did chores, picking up her tools and trailing after her like a dog. He was always easy to catch. He was not imprinted, but she did handle him a lot as a foal. He was not a big bucking horse with his first rides, and barely offered resistance. He earned the scar on his right hind end rushing through a gate. That cut earned him a trip to the vet in Fredericksburg, and sutures. That explains the scar! 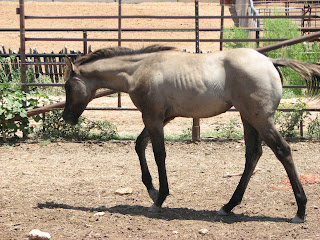 Looking gangly in this pic..love the low headset.
He was gelded at about 1.5 years. He comes from a lot of cutting blood, with proven money earners. Joey was a very smart foal and learned quickly. His sire is 15.1 HH and his dam is 14.1 HH. She told me that many offspring of the sire grow late, and she advised that Joey would probably grow until he is about 6 years old. That's a good thing, because I'd actually like to see him a little taller. He's a stout 14.1 HH at present.

It turns out Chance Cutting Horses, where Joey's sire and dam still reside, and where they train cutting horses, is only 60 miles from my house! I was invited to come out and see what they have to offer, and I intend to take them up on that. How cool would it be to see Joey's sire and dam, and maybe put joey through his training paces with his breeder?

It was a really neat conversation, capped off with some pics of Joey as a youngster, some of which are included in this post. You can see his sire and dam at the website of Chance Cutting horses. His sire is HOLI CHRISTMAS QUI and his dam is HICK BAR N GRULLO.

So I was definitely fired up to ride him today. James had his horse "Big Mack" back from training, and so we saddled up and hit the front pasture. We cantered circles, trotted all over, worked on stops and one rein stops, and yielding hindquarters. Joey did great, and it was the most I've cantered him in one session. We cantered enough for my abdominal muscles to start cramping.

On the way back to the barn, I rocked him back on his back end, and used the free end of my mecate reins to encourage him to step lively, and put him into a 360 degree spin. It was smooth and nicely controlled, a nice crossing of his front legs, just what I've always wanted to be able to do on a horse. And the best part is that James saw it and can serve as my witness. I was actually dizzy after the spin. It was awesome!

Joey is the 7th horse I've purchased in my lifetime. I've been trying to step up my horsemanship along the way, to be able to appreciate a really good horse when he came along. So far, Joey has fit the bill. It's pretty apparent that the only limit to Joey is going to be me. I am looking forward to the challenge. 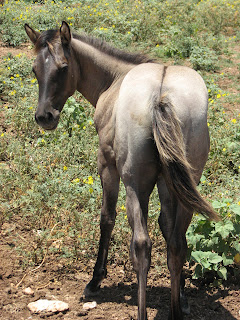 The end
Posted by Trailrider at 8:02 PM