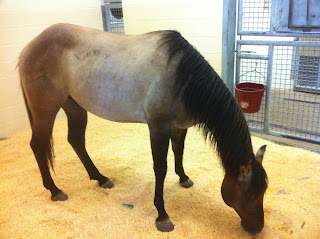 Hmm...can I eat these shavings? 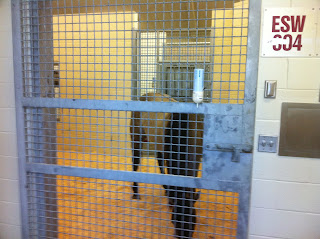 His home away from home.

Joey underwent surgical correction for his cryptorchidism at the Texas A&M Vet School on July 12th, 2011, under the direction of Dr. Peter Rakestraw. He underwent laparoscopic evaluation on both sides, and the retained testicle was found on the right side, intra-abdominal position, and very high. It was well proximal to the inguinal ring, and was never a testicle that had descended and then "sucked back up". This testicle had never descended and was never going to descend.

There were no complications. In fact, the only tough part of the experience was the shock of seeing the large area of skin that had to be shaved and prepped. It is easy to see from these pics, that grullo colored horses are truly "black duns". 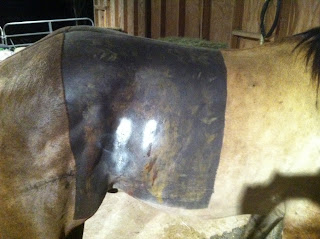 This is the right side, where the testicle was removed 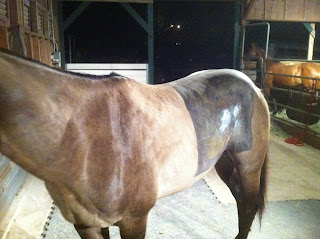 They explored the left side as well, to confirm there was no testicular tissue on that side.
He has been recovering well. I removed the sutures on July 24th, 2011. He never experienced any drainage from any of the incision sites. That was a big concern of mine, given the flies this time of year, but it proved to be a non-issue.

He is cleared to return to work 2 weeks post-op, which is today, July 26th, 2011, and I'll start him in the round pen and bring him back into shape with ground work for 7-10 days.

He needs some more time to grow his hair back, but it's progressing well. His latest pics are below. 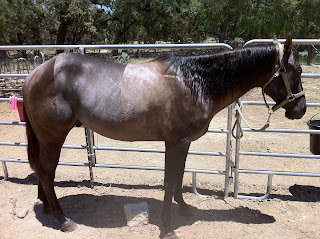 You can just see some peach fuzz coming in... 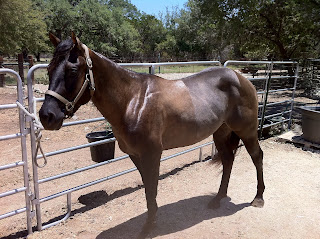 Can't wait to get him all shiny again.
His behavior has slowly been improving. He's always been a good horse, but very easily distracted by mares. Since I've had him back, he has progressively been less attentive to my mare. Lola. I've only seen 1-2 erections in the last 2 weeks, where that had been 1-2 an hour before the surgery! He seems more submissive as well. I guess the real test will start as I put him back to work, and increase his exposure to mares and other geldings.

Through all of this, the persons (2nd owners of the horse) I bought the horse from have been helpful and paid for the entire cost of the surgery. I appreciate their willingness to do the right thing. As we all know, this isn't always the case in the horse world.

Why did Joey even have to endure this surgery? Well, it started with an unscrupulous veterinarian who was willing to perform a partial castration on a horse. Clearly, only the left testicle was ever present, and was removed. More ethical vets will not proceed with castration if they only palpate one testicle. They inform the owner that to PROPERLY geld the stud, a more extensive surgery will be needed, and they will not perform a partial castration. The surgery to remove the retained testicle is then performed at a later date, when BOTH testicles can be definitively removed at the same time.

When the unethical vet performed a partial castration, the owner then had the responsibility to disclose this condition to potential buyers, or correct it.

I can tell you with certainty that the vet who performed the castration does not follow ethical practices, because he admitted it to me. I called him, and he told me "If there is only one testicle, and the owner wants me to remove it, then I remove it". He then went on to tell me that he tells the owner that the horse only had one testicle to remove. When I asked if he had records to document that he disclosed this, he told me he had no records of the procedure. Keep in mind, this "gelding" was performed 2 years ago. I spoke with 3 other vets who told me it a requirement to keep records for far longer than that.

So we know the vet had no problem with performing a partial castration. But I'll never know if he told the owner about the condition.

I asked the original owner/breeder if she remembers the procedure. She stated she was out of town when the procedure was performed, that the vet was not her usual vet, and that she was not told the horse only had one descended testicle.

In any event, the horse was sold as a gelding at the age of 2. Seeing as he was young, and kept mostly around other geldings, and has a naturally good disposition, he never was reported as acting "studdy". The 2nd owners sold him to me as a gelding at age 4, and I firmly believe they never knew about his cryptorchidism. At my place, he was exposed to new geldings, and a mare in heat, and his "stud" behavior became quickly apparent to me. Chemical testing revealed his elevated testosterone levels.

A few people in this horse's case did NOT do the right thing. This could have truly been a disaster for me, the horse, or some other poor unfortunate to encounter a "gelding" who was not truly a gelding. I mean, who thinks that their gelding isn't a gelding? I thank God that I'm a physician, and fairly distrustful of newly purchased horses, or I may have never questioned Joey's behavior or pursued the testing needed to make his diagnosis.

And I also thank The Jones's (sellers of Joey and 2nd owners), for not leaving me hanging through this experience and for paying for Joey's surgery. I know his condition was not their fault, but they did the right thing anyway, and that's good karma, and I know it will bring them blessings in the future.

Yet another lesson in the wonderful world of horses!
Posted by Trailrider at 12:44 PM

Well, alls well that ends well! Pleased to hear it, and look foward to hear about his progression in training!

Your sellers were honorable and the vet who did the partial castration was not. Glad you got the problem figured out and fixed - he seems like a very nice horse. I have a QH gelding who we just tested because he's very studdy - aggressive with the other geldings and obsessively interested in the mares - but he's not a cryptorchid, just a studdy gelding, so I have to deal with it as a training issue.

Thanks for your comments. It hasn't been easy since I bought this horse. I hope the worst is behind us.

Kate, I wish you luck in your behavior modification, and I'll check your blog to hear of your progress and techniques. Joey may have some behavior to unlearn as well.

I'm glad you opted to keep him. The brain surgery will be a success, immense and give you the horse you want.