Back to an an old friend... 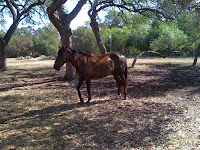 Lately, my quarterhorse Woody, has been relegated to babysitter. He is the mount I can trust to take care of any skill level rider. This Sunday I put my oldest daughter on him, and she and I did a climbing trail ride in my neighborhood. I trust him that much.
Woody will safely carry my youngest daughter and the greenest rider. But Woody is also the fastest horse I've ever ridden. If the right rider is on him, he comes alive. Once he knows you can handle the speed, he will give it to you in spades, and he loves to run.
Yesterday, I left my paso fino in the paddock and caught Woody for a ride. You could almost see his expression asking "Me? Are you going to ride me? I don't have to babysit anyone?"
I brushed him well - he is the horse that loves to roll, especially if there's mud around. He gave me all his feet for a good check and picking. He is the BEST horse I have ever had for picking up his feet. He is very limber, and picking up his rear hooves is a snap. He stood dead still for the saddle. I went to mount him, and he didn't budge. What a difference from my paso!
We started out, slowly. I mean, he was doing his usual walk, but I'm so used to my paso, Woody's QH walk feels like slow motion. In fact, all of his movements felt slow and sluggish. My paso is very sensitive, and the slightest leg bump or cue elicits a vigorous response from him. This was going to take some re-adjustment on my part.
We warmed up in my round pen area, and then the sand arena. But I knew I felt like running, and I was taking my time to remind him this was no greenhorn on his back. After a nice warm up, we were ready.
I rode him out to the front pasture, and we started our lope, skipping right through the trot. I made sure he had the correct lead, and we started our BIG circle. When I felt he knew the footing, I stepped it up, driving him with my hips on the straight stretches. After a moment's hesitation that felt like "Are you sure? Really, I can run?" we were off. He was in a flat out run, and the pasture was whizzing past. The wind was in my face, I had his rhythm matched with my hips, and we were enjoying this moment. I slowed him just a hair for our big sweeping turn, and kept him wide open on the straight-aways. Wow! What power and speed! And the best part is, you can tell HE likes it as much as I do; it's not forced from him, it flows like a child's sprint to her parents' arms. It just one of those things he truly likes to do.
We did this for several laps around the pasture, in both directions. He never lost his footing, his wind, or his desire to keep going. I checked him up after a bit, because I didn't want to push him too hard, when his routine lately has been slower. But he had plenty left in the tank, and I rarely see him winded.
He has the best endurance of any horse I've ridden. I seriously think we could contend in endurance races, something I'd like to do on him. Except that his trot is the roughest of any QH I've ridden. It's a very predictable trot to post, but if you don't post it, you'll bounce to the moon or until your back is shattered. It's his only true flaw. And he's smooth at the lope and run, it's just the trot that's hard to sit.
We finished quietly, and he got a rinse after he cooled down, followed by his grain, hay and his stall for the evening. I hope he had pleasant dreams of running through the pasture. I know I did...
Posted by Trailrider at 6:58 AM

Woody is the most wonderful boy. I wonder if there is a way to work out that trot. I also imagine him in dressage. HeSis so smart he can do anything.