I worked cattle for 2 hours with Vaquero for only the second time yesterday, and what an improvement!

Specifically: (1) He rested better. That is to say, he took advantage of "breaks" in the action and didn't stay worked up. This allowed us to work the entire 2 hours. (2) His neck reining improved dramatically. I had 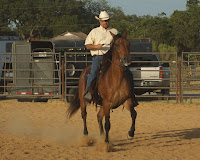 to be able to rein him with one hand so I could use the other to "push" cattle. I have usually ridden him with two hands, because I felt I had more control. He was very rough, especially turning to the left with a neck rein for the first hour, and I would often have to bring my other hand up to turn him in the narrow confines of the "alley" that we were using to push up the steers. But by the second hour, he was turning easily, and he was anticipating the action.

Problems: (1) He is still too easily bothered when I put a leg in his side and ask him to sidepass from a standstill. He wants to take this cue to mean "go forward", but when working cattle, sometimes I need him positioned just so, and the sidepass from a standstill is a useful skill. I'm not entirely sure how to improve on this, other than ground work and time. (2) Even though the neck rein is improving, it could be better, and I think this will come with me riding him with one hand more often.

One participant in the roping asked me "Is that a Peruvian Paso?". I just answered "No, he's a paso fino". I caught a lot of the ropers watching me work cattle on this funny moving horse. But I'm sure more than a few could appreciate how I was working cattle at a trot speed, but without a bounce. Vaquero was really "on" while working, and he stayed well-gaited for the entire 2 hours, so my back was feeling fine at the end.

I highly recommend working cattle on a paso fino!
Posted by Trailrider at 8:28 AM

Glad he's turning into such a good cow horse. He's come lightyears since he walked off that trailer!