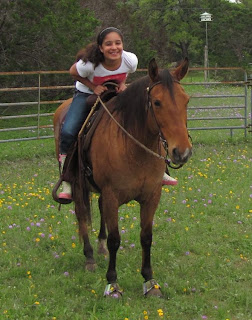 My "Hall of Fame" horses have always given me great first rides. Spirit (rest in peace) and Woody both gave me great first impressions: they moved out easily, were well broke, and didn't offer anything stupid.

I was really looking forward to my first ride on "Lola", Victoria's first horse. Overall, her ride was excellent, and she has a great chance of earning hall of fame status. What follows is a very critical review of her performance.

She entered the round pen without trepidation. We worked on flexing exercises, and it's apparent she hasn't had much work in the way of softening. She did not yield her head and flex her neck, but rather took the pressure on her face to mean she should turn her whole body. I could tell she was trying to look for the release, but not QUITE getting it. BUT, she never panicked, she never tried to get crazy, even though she was feeling pressure.

I then worked on sending her around the round pen. She walked easily, and went into a trot with just a little increased energy. Getting her to canter was another issue. I had to REALLY chase her and apply pressure to get her into a canter. And she wouldn't sustain the canter. A half trip around the round pen, and she would slip back to the trot. I attribute some of this reluctance to canter to being a little out of shape, and to having been ridden by kids. But this is an area that will need work, as I do expect my horses to canter easily. BUT, again she offered not a single buck, kick, or ANY sign of aggression towards me, even when I REALLY pressured her.

She looked in to me for cues, and I was able to change direction in her easily. Her "driveline" is a bit loose, however, so turning her was a little unpredictable. I think all this will improve with more round pen time.

It was time to mount. I sure appreciated her 14.3 HH height (confirmed with a good measure today); it made mounting a snap. She moved off a little sooner than I would like, and before I could get myself set in the saddle. But that's easily fixed with some practice.

We moved out at a walk, and it was a great walk. I could feel the spring in her rear legs, and she was really absorbing the movement, leaving me smooth in the saddle. I clucked her up to a trot, but I had to give her a little squeeze with my legs as an additional cue. Her slow trot is a little rough, but her fast trot covers some ground and I could definitely sit it. 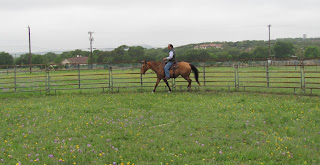 Getting her to canter was another story, and just repeated what I experienced from the ground. I had to greatly increase my energy to get her into a canter and to maintain the canter. We worked in both directions, and she took the appropriate lead. Not knowing this horse, I was wondering how she might do with a little more pressure. She hadn't done anything stupid so far, so I figured I'd try. I gave her one in the flank with my quirt, and she was off to the races! After that, if I wanted the canter, I just had to show her the quirt.

Her canter is too fast and uncollected at present, but I feel confident that I can bring it down a notch and collect her a bit more. As long as the horse doesn't do anything stupid, I can work with 'em. And Lola just needs some refinement. The nice temperament is there.

After getting her into a good sweat, the party began. The neighbors came by to meet her. Victoria and Sofia took turns riding and being led on her. And my friend Winter and her daughter Sierra, came by to meet her. Winter took a turn on her and agreed with my assessment. What was amazing was that with all the different people around, she just took it all in stride. She seems very taken with children, and looks to them and lowers her head to receive affection from kids. Victoria was very happy with the calm walk she took on her.

Lola is going to have to be versatile to be a horse I will ride and that my daughters will ride, and I'm happy to report that she is "as advertised".

I think Lola is a diamond in the rough... 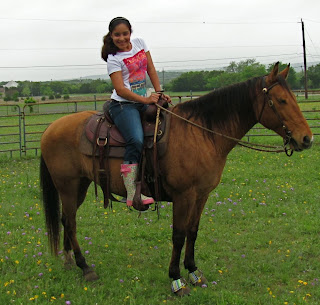 Posted by Trailrider at 6:26 PM

And she's darn lovely too. Definitely a keeper!