Ride with Frank and Tony... 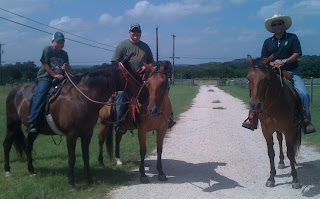 Tony on Woody, Frank on Lola, me on Vaquero
My cousin is in town, and I had a chance to ride with him today. He's the cousin that alerted me to Lola when she became available on Craig's List. He had yet to ride Lola, and had missed riding the trails in my neighborhood by circumstance of weather on his previous visits. He brought his son Tony, so after a nice evening at the Cibolo rodeo nearby the evening prior, we were primed for a Sunday morning trail ride.

Frank rode Lola, and his son Tony rode Woody. I mounted Vaquero. After a warm-up in the front pasture, we hit the trails. We did all three, and by the last mile, Tony was released from the lead rope and allowed to ride solo. 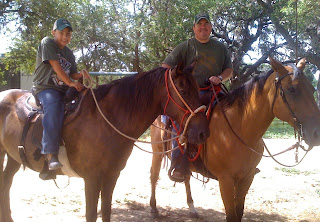 Tony and his Dad mounted and ready to start the trail ride.
At the end of the trail ride, Frank trotted and cantered Lola. I am happy to report her trot and canter for him was easy and controlled. She only stumbled a couple of times during our warm-up session, and not at all late in the trail ride or after, during trotting and cantering.

Frank was very pleased with how she rode, and really liked her height and conformation.

As the morning had warmed up to a hot day, we jumped in the pool after the ride to cool off and spent the rest of the afternoon making BBQ and talking.

Sounds good to me! Lola is coming on real nice.