We interrupt this story for a live update... 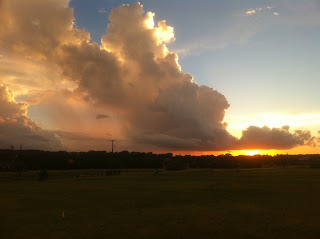 A great sunset. You can just make out James on Frosty at the far end of the pasture.

While the pitiful story of a boy hopelessly lost in the ways of horses is fascinating, we need to break away for a moment to more current events.

I got a great ride in on Lola this evening. While we rode in the front pasture, thunder was softly rolling all around us, and thunderclouds were slowly dissipating as the sun's heat started to wane.

I continued with my plan: walking and trotting to warm up. She didn't stumble once. I then approached the cones. I've been very consistently circling the cones in the same way every ride, the same cone clockwise and the other counter-clockwise. We start at a walk, build energy to a trot for a few circles, and then I cue GENTLY for the lead departure I want, while increasing my energy JUST enough to get her to break into the canter. It's been working like a champ.

We did both cones, and hence both directions, about 4-5 times, with about 3-4 circles at the canter each time. She is taking the correct lead just about every time and she is much stronger in the right (direction) lead than she was just several rides ago. She has consistently given me a nice slow canter for a few rides now, so I feel I can safely say, this isn't just a fluke.

Her stop has improved dramatically, and I almost went over the top of her today because I wasn't braced for such a good stop. I was sloppy, and led the stop with my reins instead of my seat and legs, and I damn near cracked my spine and was over her neck before I knew it. I was better after that miscue.

I then got a little ambitious with her, and instead of stopping after circling one of the cones, I led her out of the circle, brought my energy down to get her in a trot, and then led her to the next cone where we would circle in the trot, but then quickly (but still trying for smooth and slow speed) go to the canter. This is all in anticipation of doing figure 8 work with her in the future. Also, I'm building up to eventually asking for a flying lead change when we go from one cone to the next. But that's several rides away. She still needs conditioning and to build strength.

She seems much more relaxed, and may be more affectionate than I thought. She seems to enjoy pats on her neck and soft words. I almost thought I had her completely when she came and watered while I was filling her water bucket, looking at me cautiously but with less apprehension than her usual; but then she later gave me her hind end when I wanted to reach through her stall panel and touch her face. So she's not done playing hard to get just yet. But I sense there's a crack in the veneer....
Posted by Trailrider at 7:51 PM

Fantastic! I'm glad you're getting through to her. You just keep building on what you've done, and I'm sure that's a very different experience for her. I can't wait to see how it progresses.

I bet it would go really fast if you'd give her a cookie.

I think I'm just getting better at presenting things to the horses without resorting to physical dominance. I'm using more mind control.

You know Breathe, if I felt that treats would help, I'd consider. But they've always HURT my training and caused respect issues. I don't like getting mugged by my horse looking for treats on my person. It's disrespectful to me and makes it harder to train them, IMO.

Have to agree with you on that one TR, treats only make it worse, the horse can end up barging.
You write well, descriptions are good, and I find myself on the horse with you. (metaphorically speaking!)