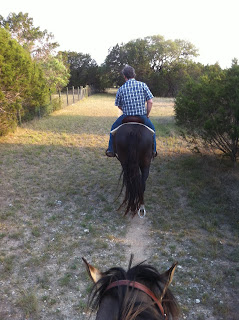 The view from the grullo. My friend Alex on Woody in front.

I caught a break with work this evening, and was able to work with the grullo. I didn't have all the time in the world, so this was going to be a saddle up and ride evening.

He is still dancing during saddle up, so this will need some work. I think I'll sack him out with the saddle pad and just go back to basics.

We warmed up in the round pen. He was poking along with his slow walk. He trotted easily. But he was giving me all kinds of grief about maintaining his trot. And he was resistant to go into canter and stay in canter. I was squeezing with thighs, then calves, and finally heel, but I was getting no response. I even reached back to swat him with my hand, but he would not canter. Finally, I gave him some kicks (with the right leg for the left lead), and I got a response. He gave me 2-3 bucks. I rode them out, and promptly got him trotting again. I don't blame him for bucking. I was kicking him pretty good. But it was all I could do to get him moving. I had exhausted all my other leg aids. At that point, maybe a crop would have helped.

After a few times around, I dismounted and round penned him from the ground, asking for and getting, the canter. I did this in both directions. Then I mounted again and tried for the canter again.

We then went to the front pasture and rode around and finally hit a trail. I cantered him a bit in an open spot, but it was still too much work to get it from him.

I'll keep at this. I know he can get it, and was already improving by ride's end. I even rode him some more at the canter in the round pen when we got back from the trail. I do NOT want this to be a sticking point. He and I have many things to work on, but moving out and cantering needs to be second nature. I will not have a horse that won't canter.

I think the lack of ground work after a week off led to some of the problem. But he's sound again, so the work will begin in earnest this week.
Posted by Trailrider at 7:53 PM