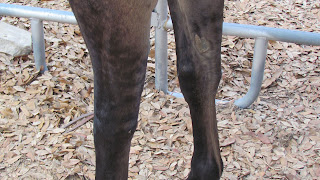 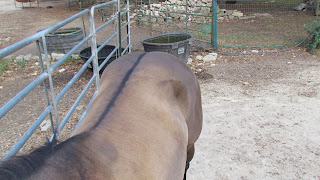 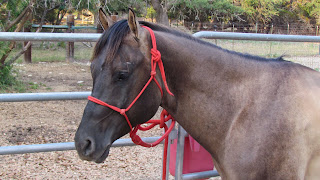 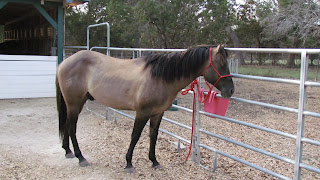 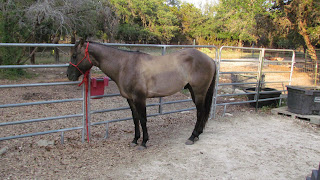 Grullo appeared to be moving better today. I even thought of riding him, until he took 3 steps in the round pen, and it was apparent he is still hurting. I'm going to give him several days, but if no improvement, then he's going to the vet.

I left him tied again today while we headed out on a trail ride. Can never hurt to leave a horse hanging for a while.

Before we left, I tried my gaited saddle on the grullo again. I'm happy to report that it fits him better than I thought. With the right pad, the shorter skirt just fits him. His shoulders look free, and his hips are not running into the skirt. Looks like this will be the saddle he gets ridden in until I figure things out. The skirt on this saddle is 24.5". The most this little guy could probably take is 25". I swear, this gaited saddle has come in very handy. The wider shoulder area means more freedom, and since the tree has the front end of a paso, but the rear of a QH, most QH's ride very well in this saddle.

James rode Lola, I rode the paso, and my friend Alex rode Woody. It was a great ride, and we found a mostly undeveloped hill in the neighborhood to climb. By hill, I mean a big, steep hill. It was a blast, and it broke up the routine for the horses. We cantered plenty, and the horses really did well.

The grullo was happy to see us return, but he didn't look worried at being left. There's that good attitude again.

I'm frustrated the the grullo isn't getting all this great riding time, but I'll just have to wait on him. For now, enjoy the pics.
Posted by Trailrider at 7:47 PM

You doing any hydro therapy or other obvious treatments? Is there swelling?

No obvious swelling. No lacerations. I've started no treatment yet because I don't know what I'm treating.