This is what it's all about... 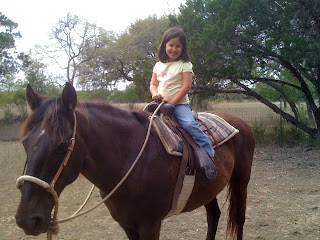 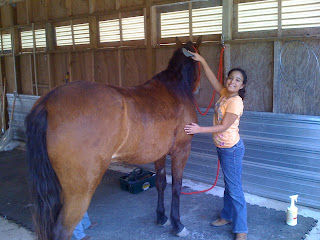 The kids and I grabbed some outdoor time today, and it was awesome.
Victoria and I spent some time in the round pen working Vaquero.  He did great, and was responsive with lateral flexion on the ground and better with maintaining his speed and going through speed transitions. He was doing so well, I put a saddle on him.  He danced a bit for mounting, but MUCH less than our first few rides.  He was still trembling under saddle at first, but within 30-45 seconds, got it under control.  The experience on the ground was duplicated in the saddle (shocking) and he kept his speed easily at paso corto for most of our ride, going into the largo only when I asked for it.  He still doesn't walk well, but he can't do that from the ground yet either, so we still have work to do.
Victoria was fascinated by his different walk.  Sofia said he moves like he's walking fast, and proceeded to demonstrate!  V was so intrigued, that I was able to sell her on the idea of riding him while I led her in the round pen.  She was grinning from ear to ear, and enjoyed the smooth ride.  It was good for Vaquero, because I held him while she mounted, and he put up with her crude efforts to get on him without dancing underneath her.  He also got to practice his flat walk, because I kept it slow while leading V for most of the ride; although, I did get him into a slow corto for V to "ride the glide".
The girls then proceeded to pamper him with endless brushing after the ride.  It is CLEAR that Vaquero likes to be groomed.
I grabbed Woody next, and Sofia was led around.  She and Woody were doing so well, I gave her some instructions on the reins, and she rode Woody free, with me walking ahead, but off the lead rope.  She was turning him well, and using both hands.  She is clearly a natural, and understands horses well.
Weather permitting, we'll make some time for more horse adventures tomorrow.  I am very encouraged by the progress the paso fino is making, and I got the sense that he genuinely likes children.  He was very attuned to the kids, and calmed down in their presence.  Just one of those days when it's good to be a dad and a horseman.
Posted by Trailrider at 3:19 PM