Another good day in the round pen... 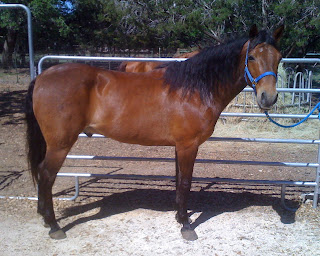 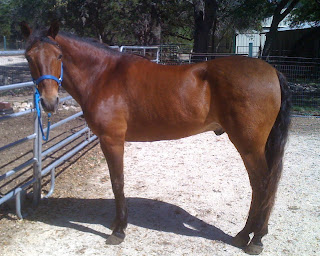 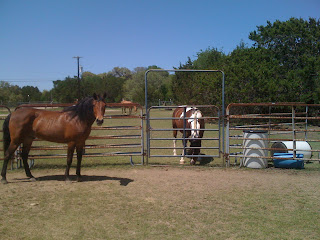 A great day in the Hill Country, even with a bad back.  I loaded up on pain meds, and decided to test if the last round pen's session was a fluke.  Would Vaquero flat walk again?  Or will it be a case of regression and frustration?
We hiked to the round pen, after a little struggle to be caught.  Actually, the struggle was more to get Woody, the herd leader, caught and out of the way; after that it was pretty simple.
My neighbors are nice enough to let me use their round pen.  We had to wade through their horses to get to the round pen.  It's not always easy to lead a horse through another horse's "turf".  After getting through Yaweh, the mare, and Canyon, the paint gelding, we reached an oasis in the pasture: the round pen.  The neighbor's horses stuck around for the show, however.
He did great! He was much more responsive to me being in front of his "driveline", and adjusted speeds quickly.  When his largo broke into a canter, I could easily bring him down just a hair to get back into the largo.  He worked for an extended period in the corto.  And he walked.  He really walked.  I mean I brought him to a walk at least a half dozen times from the corto and largo.  And he genuinely seemed relaxed at the walk.
I worked him for 20 minutes or so, until I saw lather.  Then we worked on his flexion exercises.  He remained mostly focused on me, even when Canyon would make runs and charges at the round pen and try to drive Vaquero.  Vaquero responded very little to the other horses, and his inside ear and speed, stayed with me.
I gave him a good bath after, and that's shown in the 2 photos, one from each side.
A great day in the round pen...
Posted by Trailrider at 2:18 PM

How exciting! Even though you should be recovering - I didn't think you'd be able to. Wouldn't you hate to be your own doctor?

We moved Canyon... I've been sick as a dog. Will try to drop by soon.