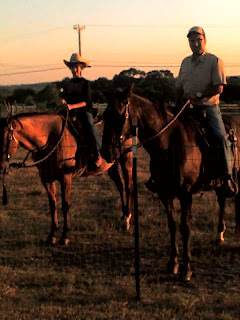 Will and Lola, me and Woody

My niece and nephew are in town and staying with me for the week, and I have my kids for the next week as well, so this evening was the start of some fun at my place.

My nephew is trying to be a cowboy, and my mother helped him today by buying him some jeans, a hat, and some boots. I was more than willing to comply by getting him on a horse. But first, he watered the horses and helped muck stalls, a little. I outfitted him on Lola and we did some riding, with me ponying Lola on Woody. After a few pointers and several safe laps, and within the confines of the front pasture, I turned him loose. We walked, and he did a really good job with Lola. He just might be a natural. No fear and he was not upset when he had to bring her around to keep her from walking to the gate that she thinks is the way out of work.

I parked my nephew and Lola in a corner of the pasture and worked Woody. Just nice circles around the cones. He picked up both leads well, and only needed correction from counter-cantering one time. He worked up a nice sweat, and it was about 15 steady minutes of canter/trot. His stop and back up were much sharper. This is my second ride in a row with him without an intervening beginner on his back, and he's already sharpening up.

Hopefully, there will be a lot more riding this week...
Posted by Trailrider at 7:36 PM

Always good to hear how you are doing out there.

Looks like the horses will get a work out this week!

Nice to have kids around who are interested in horses and riding. Mine are all grown up now, but they both still ride, which is great.