With all the focus on riding Lola into better condition, and keeping Woody (my Azteca) ridden and tuned up, my paso fino Vaquero has been languishing back at the barn. But last ride out I used my new Myler snaffle bit with the mecate rein set-up, and he rode reasonably well. He was high strung and over anxious, but I was impressed how much better he rode in the snaffle versus the Myler bit with shanks I usually use with him. With the snaffle, he was much more calm and less prone to over-react when I asked for simple movements.

I got home late, but I talked James into riding a few trails with me and Vaquero. He mounted Frosty. I reasoned that it was a full moon and already up, so we would have that to light the way home. 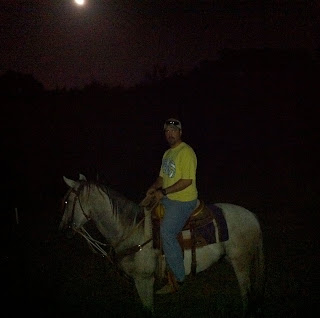 Right away, I had to deal with some extra energy from Vaquero as I tried to position him to allow me to open a gate. He's never been good at relaxing by a gate. But with some patience, we succeeded. And then we were off. I was hoping to ride hard and fast, but James had reservations with Frosty, his 2 year old colt, because Frosty's stop is not very good. As it was getting dark fast, I agreed to ride slow, and set a goal to use this ride to keep Vaquero as calm as possible.

It was a great success. Vaquero gave me his flat walk, and responded well when I cued him to relax. The snaffle bit is NOT a fluke. This is the second good ride in a row with this set-up. What I think is that Vaquero has a lot of brio (read try) and engaging his mouth just gets him more fired up than he needs to be. He's already ready to do anything I ask, so to ask harder just gets him OVER excited.

In fact, I doubt he needs a bit at all. I think he would ride just fine bit-less. The snaffle gives ME the security I want, and it's easier to ride him because it's like the power steering is OFF and he's not so touchy.

James even commented after the ride, "I think that's your trail horse". And the truth is, he is a great trail horse when he is able to relax. Maybe I've found the key with this bit.

By the way, riding with the full moon was awesome. I was very proud of both horses for not spooking at all the shadows and deer that kept popping up on the trail like ghosts. I think I was more spooked than they were several times...
Posted by Trailrider at 8:13 PM

I found that my horse, having tried various bits, Myler combo, curbs etc. She always showed over excited, when asked to do a simple task. It took me a while, to sort it out. However, after some tooth surgery. Totally unrelated to any bit problem. I was forced to ride her in her old Bosal. I had used this for her early training.
When I started using this again, she became relaxed, confident and above all, she settled into being a good Trail horse, calm, and able to concentrate on doing her job, as opposed to being anxious.

Interesting - Perhaps you were "shouting" at him in that other bit. Glad to see you getting out on Vaquero. I think of him as the horse that makes you a better horseman. The other two don't require you to grow...

Cheyenne: funny you should mention the bosal. I did try him in one when I first got him about 1.5 years ago. It wasn't really a success, but the breed was new to me. I just last night considered re-trying him in a bosal.

Paso finos are traditionally ridden in a Jaquima, a device that gives you two sets of reins: one that attaches to a bridle-like bosal device and is the primary means of control, and another set that attaches to the bit, used only lightly and rarely. I think I'm understanding why the breed is ridden this way. The paso finos with exceptional brio really don't need anything in their mouth - they respond very briskly without encouragement. I need to order a Jaquima and try that.

Brio does mean "full of spirit and energy" and that is just what a Paso Fino is full of...and of course, looking good, too.

Bits give us humans a sense of security, but as we know, all horses can run through any bit if they really want to, even bicycle chain and barbed wire bits. They might break a jaw and destroy their mouth in the process, but if they want to run right through a bit, they can and they will.